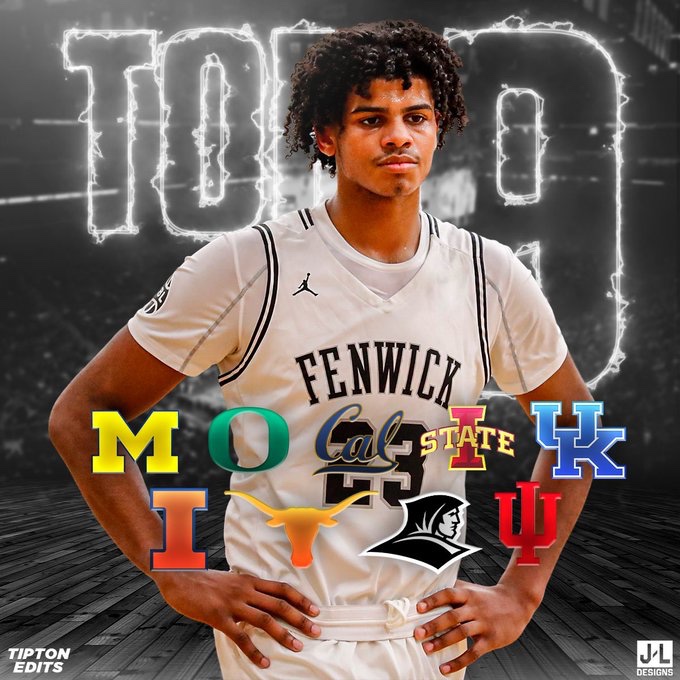 Back on September 25th Fenwick Friars forward Bryce Hopkins was set to cut his list from 9 to 4 finalists. Something since changed and Hopkins backed out of another cut, saying all the top 9 were great schools. It was thought that the Friars were going to be among the final 4 schools that would include Kentucky, Illinois and Indiana.

I had written about Bryce Hopkins’ game before when he reopened his commitment from Louisville due to potential sanctions. It is easy to see why he is viewed as a top-30 recruit. At 6-7 he’s a very intriguing hybrid forward that can score in the paint but also has the ability to expand the floor with his offensive game. He reminds me a lot of Tobias Harris when he was playing at Tennessee.

Last night Kevin McNamara, who now has his own website that you can subscribe to, wrote about Providence as a real dark horse to land Hopkins. With that lets look at his final 9 and breakdown what appears to be a 4 team race.

Let’s start with the hometown team for Hopkins. The Illini figure to have a good a chance as any of landing Hopkins. Brad Underwood has done a terrific job landing and developing talent in Champlain with Ayo Dosunmu and Kofi Cockburn who figure to be two of the better players in all of college hoops. It is clear this program is on the rise and fans hope they can get back to the Deron Williams/Dee Brown days. If Hopkins wants to play close to home, he will pick the Illini.

Surprisingly, we haven’t heard too much about traction between Illinois and Hopkins, so it is unclear how much of a true contender they are.

In terms of program tradition and history, IU has the edge over any finalist outside of Kentucky. Archie Miller has had so-so results on the court, but it hasn’t slowed him down from landing top talent. It has been said that Hopkins’ father was in awe at their visit to Bloomington and the program speaks for itself. On top of that, a lot of Chicago-area kids go to IU, so it also checks the “local” box.

In terms of contenders to land Hopkins, Indiana appears to be in the final 3 with Kentucky and Providence.

Any time Coach Calipari makes a final list, he is a tough man to beat. At times it feels the question isn’t does the player want to play for Kentucky. The real question is does Coach Cal want the player to play at Kentucky? He is recruiting at such a high level that he can essentially cherry pick which players in each class he wants to come play at Lexington.

For Hopkins it’s tough to watch the NBA Bubble this year and not think Coach Cal is your quickest shot to NBA success. While Kentucky on paper is the favorite, there are a few others that can give them a run for their money.

If you read Kevin McNamara’s piece the Friars have been viewed as a serious dark horse for Bryce Hopkins by a lot of the national recruiting writers. One of the reasons is his mother’s connection to New England growing up in New Bedford. Hopkins was in the area over the summer and was able to visit the school albeit with restrictions due to COVID. The Friars already have a New Bedford native in Syracuse transfer Brycen Goodine. So the “family culture” connection is something that Hopkins is considering.

On top of that he could sell Hopkins on immediately opportunity and playing time. At Kentucky there is no guarantee for that. They can also pitch how they’ve developed guys like Ben Bentil, Alpha Diallo, and LaDontae Henton to be all Big East caliber players. 

Lastly, in reading interviews, it appears Hopkins and his family have connected with Coach Cooley the best out of all the final coaches. That is no surprise for those who follow the Friar program.

The Crier- I’m going to be seen as such a homer picking the Friars for two recruits in a row, but I can’t help myself. I have felt good about this one, as soon as Hopkins decomitted from Louisville with Cooley and Cal in hot pursuit. My feeling is if he wants UK he would’ve committed sooner. We missed out on March Madness last year so we are due for a big upset.

BOC – I guess I’m the wet blanket in this duo. I’m going to say Hopkins picks UK over the Friars. In following this recruitment, I get the sense Hopkins wants to personally goto Providence, while those around him want him to go with the bright shiny object in Kentucky or Indiana. Even the most ardent of Providence fans would say those two programs have more prestige than the Friars.

If I’m Cooley, I’m pitching the importance and impact of a player like Hopkins choosing Providence. He’ll have the spotlight on him from the moment he walks onto campus, while choosing UK would just be perceived as another 4/5 star coming to Lexington. He’d just be another cog in the recruiting machine at Kentucky, honestly. He can create his own legacy in Providence or choose the path of least resistance in Kentucky. We’ll see what wins out, but I think influences around him and the appeal of playing for a true blue blood sway him to the Wildcats.

While we will have our fingers crossed with this one, the recruitment on Bryce Hopkins is expected to heat up within the next couple days, with a commitment possible within two weeks!

One thought on “Bryce Hopkins close to deciding? Do the Friars pull off the recruiting upset?”