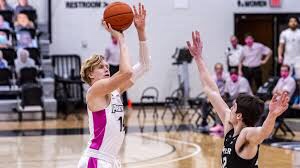 Providence returned to the floor for the first time in 8 days and put together a complete performance against the Xavier Musketeers. PC was led in scoring by Noah Horchler, who finished with a season-high 20 points. Xavier is a good team fighting for an at large, yet the Friars played with more desperation. For Xavier it’s one they almost can’t afford to lose. For PC it is something to build upon as they wrap up the regular season and make preparations for MSG. Here are the takeaways.

As referenced above, the play of Noah Horchler was the storyline in this one. We’ve seen very improved play from Noah as of late and today it culminated in a big night. He had 20 points on 7/14 from the floor and shot 3/5 from three. He also made his presence felt on the defensive end with 9 rebounds and 2 blocks. This is the Noah Horchler that we saw at UNF against the likes of FSU and Florida. It was his best night in the black (pink) and white.

Also, this dunk was just absurd:

Contribution Across the Board

This may have been the first time all year where 5 guys all had it going. We mentioned Horchler but Duke had 18 points, Reeves had 16, Watson had 15 and Bynum added 10. This was the starting 5 some envisioned going into the year, and it was great to see them all produce together.

With teams focusing their defensive strategy on Duke and Watson, it is going to give the other players open looks. They took advantage today.

The Crier tweeted at halftime that in the first half the Friars reminded him of the Alabama Crimson Tide. By the time the final horn sounded the scoreboard would tend to agree. If you’ve watched Bama this year they hunt for good looks at 3 and play tough defense. PC did just that, going 11/21 from 3 and their hounding defense seemed to wear on Xavier as the game progressed. This is a fun brand of basketball to watch and if the Friars can keep this up, they’ll be a dangerous team in the Big East Tournament.

The Friars have another long break before playing St. John’s next Wednesday. It wouldn’t surprise us if Providence scheduled a game this weekend, as they look to add more games to their resume.