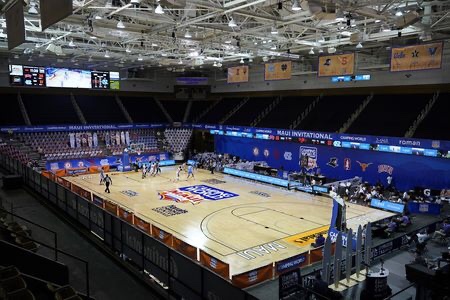 The Providence Friars wrapped up the program’s third trip to the Maui Invitational with a loss to Alabama 88-71 Wednesday night. The Friars were trying to salvage a respectable 2-1 record in the event but were unable to keep up with the Tide. So instead they will return to Providence with a 1-2 record and another disappointing MTE.

The Friars quickly raced out to an 8-0 lead, however it did not last long. Alabama would rattle off the next 11. The Friars struggled to get any offense going in the first half. Due to several trips to the free throw line and Alabama’s sluggish shooting start, the Friars were fortunate to be down only 9 at the break.

The tide turned (see what we did there?) on Alabama’s three point shooting in the second half. Alabama would hit their first 6 three point attempts after the break and just like that the Friars found themselves down 23 with 10 minutes to play. Ed Cooley theoretically waved the white flag by inserting freshman Alyn Breed, and transfers Brycen Goodine and Ed Croswell. Instead the group were able to rattle off a 12-0 run, and the door became slightly open again. Alabama quickly slammed the door shut by hitting their next two triples.

While a disappointing loss and frustrating to see the Friars struggle in a second consecutive early season tournament, we must keep things in perspective. The Friars leave Asheville with a 2-2 record but with no bad losses on their resume. I’ll take that over what they did last year. There is plenty of basketball to be played and by no way did the Friars play their way out of NCAAT consideration in this tournament. Having said that, the Friars will want to look to take care of business the remainder of the non-conference and look for some momentum heading info Big East play. The Friars will look to do so starting Saturday when they host Fairleigh Dickinson.

One final comment on the Maui: The lackluster performance in Asheville will have ramifications down the road. Friar fans always are up in arms about their poor seeding in the NCAA tourney. Losing to two “bubble” teams in Indiana and Alabama will lead to that happening. It’s a vicious cycle under Cooley where the Friars start slow and then have to claw their way back.

Nate Watson once again was the go to guy for offense as he poured in 17 points on 6/8 shooting. Watson could have had a bigger night had he not gotten in foul trouble for the first time this season. The only thing holding Watson back from being an all-conference performer is his rebounding. The Friars are going to need him to get more than 3 rebounds in a game. The offense is there, and I think most importantly, he is realizing just how dominant he is. That’s a scary thought.

Despite the loss, the Friars did have two guys that were pleasant surprises. Jimmy Nichols gave the Friars good minutes in the first half and scored 6 points. In the second half it was freshman Alyn Breed’s turn to surprise. He looked very comfortable out there and his 9 points helped fuel a 12-0 run. The Friars may have found a diamond in the rough in Breed. Cooley will have to look at starting Breed over Bynum.

Jared Bynum had his worst performance as a Friar in this one. He didn’t record a single point and went 0/7 from the floor. He has yet to hit a three for the Friars this season as he is now 0-11. He definitely just seems to be in his own head, as he had some clean looks. AJ Reeves didn’t have the best shooting night, 3 of 8 from the floor including 1-5 from 3. He did however have 10 points and did look to attack the basket. If he continues to do that the 3-point shoot will follow. The Friars need to find a 3rd option and one of these two need to step up.

PC played a surprising amount of zone in this one and Alabama’s shooting made them pay. It was a surprising strategy but may have been one of necessity. Mentioned in the last game that the Friars looked gassed and playing their third game in three days felt like Cooley thought zone would give them their best chance. Instead they ended up getting crushed on the offensive glass and gave up a bunch of threes.

We discussed themes heading into the game. Let’s revisit those:

1. Limit Easy Looks from Deep – This was an unmitigated failure by the Friars. Bama drained 12 three pointers on 29 shots, making 41% from 3.

2. Avoid a Track Meet – Alabama scored 88 points. Enough said. It was disheartening to see them fold on the defensive end.

3. Feed Big Nate – He was one of the bright spots offensively. If he didn’t have foul trouble, he likely would have had more paint touches and looks.

One thought on “Friars Leave Asheville With Loss to Alabama”