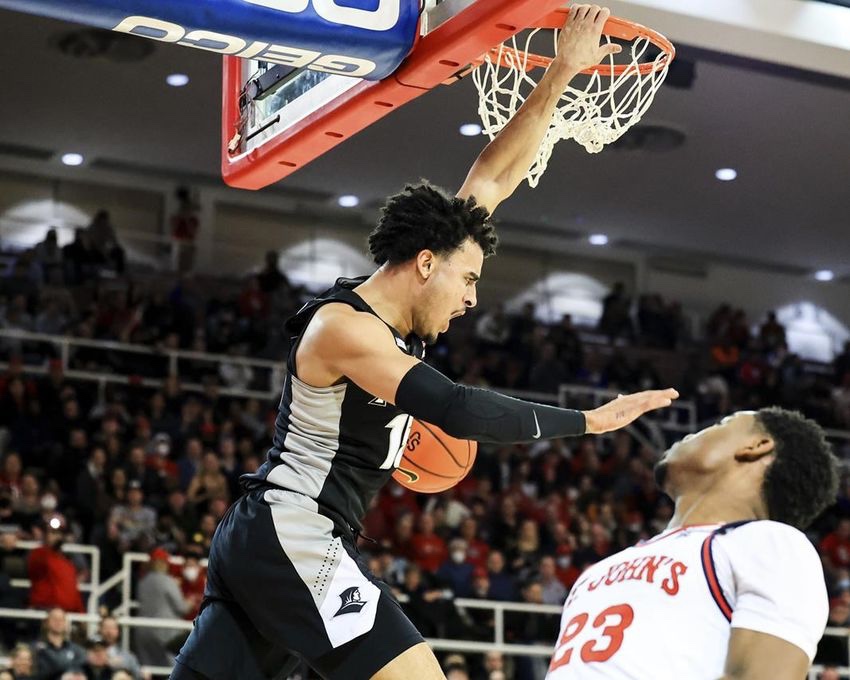 Tell me if you’ve heard this before: the Providence Friars built a solid lead and executed down the stretch to hold onto said lead. That seems to be the secret recipe this season as the Friars once again won a game decided within 5 points. The Providence Friars are 8-0 in such games. The Crier was worried about this one. St John’s, now 11-9 (3-6), came in desperately needing a win and Providence was coming off an emotional rollercoaster last week. The betting line stunk to high heaven, and a let down seemed inevitable. Welp what the Crier didn’t realize was this team is built different. They stay calm, cool and collected in crunch time and just know how to win. With the win the Friars are now 19-2 (9-1), their best start since the 72-73 Final Four team. Let’s take a look how they got it done.

Friars Get Beat on the Glass, turn ball over 13 times and still win– Not always a recipe for success on the road but the Friars still found a way to win. Consider this: the turnovers and -3 margin on the glass allowed the Johnnies to have 71 shot attempts, 16 more than PC. The Friars had to defend more than the Johnnies did, yet were up for the task. While 13 turnovers is not ideal, a lot of them were dead ball turnovers, which is better than having SJ out in transition. It also helped the Johnnies turned over the rock 16 times.

Bynum and Watson lead the way with a balanced offensive attack- Early in the game SJ’s Posh Alexander (more on him later) tried to save a ball and threw it off Bynum’s face. It seemed to piss Bynum off, and he let his game do the talking the rest of the way. Bynum dazzled with 19 points (4/5 3pt) and some crafty finishes at the rim. Bynum also had the shot of the night. After SJ took a 2-point lead with 3 minutes to play, Bynum had the shot clock running down and buried a deep three.

Nate Watson shook off a sluggish first half and went to work in the second stanza . Watson finished with 16 points (15 in the second half) and 5 rebounds. Durham and Horchler also found themselves with double digit points, as Al made his hay with clutch free throws late. This team has been such a balanced offense all season long.

Ghost Champagnie- In the first meeting between these two teams the Friars held Julian Champagnie to 11 points. We couldn’t possibly expect them to contain him again right? In the second game, PC held him to 9 points. He scored 20 points in two games vs PC, while averaging 18 points per game on the season. Minaya will draw most of the praise for the defensive work, but Horchler deserves some credit too, as he stopped him on a few occasions.

Posh Alexander Balls Out but Has 2 Costly Mistakes- While Champagnie was invisible, his lead guard Posh Alexander stuffed the stat sheet. The sophomore sensation scored a game high 29 points and added 11 assists and 4 rebounds. Posh was electric but made two costly mistakes. The first might’ve been the turning point of the game. The Johnnies had just cut the lead from 8 points to 6 and were going to the line for a sketchy flagrant foul call on Al Durham. Johnnies made 1/2 on the flagrant free throws and then SJ turns over the ball on the free possession. Posh then reaches in and fouled Bynum shooting a 3 with 0.8 seconds left in the first half. Bynum hit all 3 and just like that the lead was back at 8 heading into the break.

Then in the second half Posh scored a dunk after cherry picking and decides to do a chin-up plus a backboard slap and received a technical. Durham hit the technical free throw. Those counting at home that’s 4 free points Posh gave the Friars. The Crier will admit he was wrong to predict St. John’s as the second best team in Big East going into the season. It is clear they are the 2020-2021 Providence Friars.

The Friars will look to wrap up this road stretch with a trip to Georgetown on Sunday 12pm on FS1.

One thought on “Friars Execute Down the Stretch (Again)- Sweep St. John’s with 86-82 Victory”