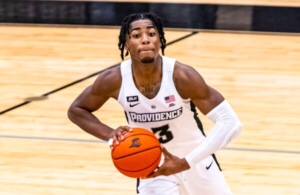 The Friars returned to action after their trip to the Maui Invitational to face the Fairleigh Dickinson Knights. The Friars were sluggish out the gates but were able to use a strong second half to deafest FDU 79-67 at Alumni Hall Saturday afternoon.

The Friars returned to action after their trip to the Maui Invitational to face the Fairleigh Dickinson Knights. The Friars were sluggish out the gates but were able to use a strong second half to deafest FDU 79-67 at Alumni Hall Saturday afternoon.

PC’s first possession was a turnover, and the team looked extremely sloppy the first 3 minutes into the game. Cooley took action by yanking all 5 starters from the game. It didn’t pay immediate dividends, as the two teams entered the break all even at 32, but I think it sent a message to the team that they need to earn their minutes.

In the second half, the Friars were much stronger defensively and it really helped the offense to get back in sync. The Friars scored a season high 48 points in the second half. It wasn’t always pretty, but at the end of the day the Friars got the win, so let’s look at some takeaways.

This year we knew the Friars were going to give the keys to Friar-mobile to junior David Duke. Duke had his best game this season with 28 points and 8 rebounds. I think the biggest thing tonight is he showed his leadership. The team was struggling and needed him to step up. He did so. Expect his star to continue to rise as the season progresses. It may take some time for him to truly embrace the leadership role.

We Still Are Horrendous From 3

We spoke about how the Friars 3-point shooting is hurting them, and today was no different. The boys throw up brick after brick leading to a 1/15 evening. Reeves and Bynum combined 0/8 from deep, as they both continue to mightily struggle. I do not think we will ever be a great 3-point shooting team, but these guys are more than capable. As much as it pains us to write, if our boys have a wide open look from deep, they need to take it. What we don’t want is last second contested three balls.

The Crier has been hard on Gantt, but it’s not because I don’t think he’s good. Gantt was horrendous on defense against IU and to his credit he was much better the next two games. We know he can defend but offensively we still needed to see more. I think today was a great sign that he is progressing along. He finished with 9 points on 4/6 and also added 7 rebounds and 5 assists. Towards the end of the game he had a nifty and-1 and Duke immediately grabbed the sophomore. Not sure what he said but it was probably along the lines of pumping up the forward.

People were clamoring to #StartAlynBreed and while I’m not ready to give up on Bynum, I can’t help but be impressed with his play. Breed got extra playing time after his nice performance against Alabama and again he paid dividends. He chipped in 8 points on 3/4 shooting. Breed wasn’t highly rated coming out of high school but through his career he played on loaded teams in high school, prep school and AAU. That shows up in the game, as he doesn’t try to do much and plays well with others. This is an encouraging sign for a guy who can be a staple in Friartown in the next few years.

I think he has earned solid minutes moving forward and should be one of the first people off the bench. The offense just seems to flow better with him in the game.

Watson Continues to Shine on Offense

Nate continued his hot start to the season, putting up 20 points on 8 field goal attempts. What was more impressive was his showing at the free throw line, making all 8 of his attempts. The importance of this cannot be understated, as I anticipate Watson will get to the line at least 5 times a game. If he can average, at worst, 70 percent from the line, we’ll be in a very good position.

The Friars’ next game will be at TCU Wednesday 5:00pm on ESPNU. It will be a great test for the Friars. Playing an unfamiliar team outside your conference on the road is never easy as we saw last year against a Northwestern team that ended up being pretty bad. We will have coverage leading up to the game but will say it will be another test for our big men.